Currently, kologo music is undergoing a rapid renaissance and drastically changing, modernizing to a 21st century sound. Though many aspects of traditional kologo music remain, there are some key differences that I will make clear. Firstly, there is the addition of Twi and English into the corpus of music. Secondly, there has been the addition of digital beats and non-traditional instruments, to create an entire new distinct sound, yet based in the same tradition. The aspects that still remain true are song meanings. Usually, regardless of the language, the song meanings are deep, proverbial, and suggestive of creating a better world. Additionally, the way that the instrument is played is the same. If one was comparing flamenco guitar playing with 1960’s British Rock, the basics of guitar playing are still there, regardless of the extreme differences in sound. Similarly, with the two-stringed kologo, the technique of how one plays the instrument remains, both mimicking and ostinado patterns remaining. That being said, there are several different emerging paths with which to analyze the modernization of kologo music, which I now hope to expound upon.

Atongo Zimba’s “Savanna Breeze”
The first time I put in Atongo Zimba’s “Savanna Breeze” album I was shocked at what I heard. I had been listening to the Frafra musicians out of Bolgatanga and King Ayisoba’s fusion with hiplife, but Atongo Zimba’s album was something of a different breed. It taps into the greater sound within the World Music scene, utilizing heavy jazz influences. At times, it is even difficult to hear the kologo, but one can always hear his African-influenced melodies.
What makes this music different is its complete utilization of other instruments. He is playing with a full live band, which is not backing his instrument, but rather creating a synthesis of sound. Unlike the raw nature of the traditional kologo-singer combination, this album goes down smooth. The emotion can be heard in his singing, but the musicianship is what sets it apart. In many ways, perhaps it would not be surprising to hear this if it had come from Senegal, Burkina Faso, or Mali, where the kologo’s sister instruments have been used in this nature. But as far as I was aware, the Frafra kologo had never been used in such a line-up and as part of such a smooth jazz sound with World Music influences. 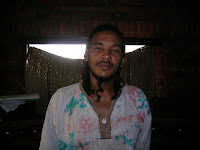 In my analysis, another aspect of how the music is being taken from its traditional setting and modernized is through the vision of Executive Producer of Pidgen Music Studio Panji Anoff (pictured Right) and his work with King Ayisoba. When King Ayisoba released his album “Modern Ghanaians”, kologo music (and maybe the world) was changed forever. By singing in pidgin, Ayisoba was doing more than just changing the language he was singing in. Pidgin, as a language, represents a “taking back of the language” (Personal Communication, Panji Anoff, 14 November 2008). Panji continues, describing what pidgin represents,
English is not ours but Pidgen is ours. It takes the expressiveness of African language and uses it in English to create our own language. When we say “dat nigre is bad” it means he is bad to the white people, which means he is good for black people. We adopted the antihero; anyone who was thought to be bad among whites was good among the blacks. (Personal Communication, Panji Anoff, 14 November 2008)

The idea of “Modern Ghanaians” captures this sentiment. Rather than succumb to the pressures of the West to create popular music, the concept of “Modern Ghanaians” mixes the idea of taking the traditional and making it modern. The kologo instrument and Ayisoba’s individuality mark the traditional aspect. But when it is combined with hiplife stars rapping over beats created by a traditional African instrument, then the meeting between modern and traditional achieves equilibrium. And when all this is added with electronic computer beats and/or live instruments, the fusion is even greater. During one lesson at the beach by the Arts Centre, Steve-O and I were playing when two young men came beside us and started freestyle rapping. It was this moment that I realized the significance of what is currently going on. If “Hip hop came and suddenly young people had a voice” (Personal Communication, Panji Anoff, 14 November 2008), then the meeting of hip hop and kologo gave young African men a proud voice. They are now allowed to tap into the global youth community through hip hop while not abandoning their African heritage and tradition. This is even more relevant when one considers it against the backdrop of the hiplife live music scene, in which live shows are mimed by MC’s, rather than live performances. John Collins says, “Panji recognized that hiplife was all mimed and that it would never develop or go anywhere, so he sought out a way to make it live so it would develop, which is why he works with the likes of Ayisoba and others” (Personal Communication, John Collins, 15 November 2008). With Ayisoba’s music, everything about it is live – the music being played, the words being sung, the beats being pumped, and the lyrics the MC raps. 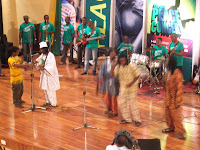 “We are Ghanaians, We are Modern Ghanaians” is the call to overcome neocolonial or postcolonial influences which tell the young African that he or she is inferior to the European or American. These wise words are drawn straight from the tradition of deep song meanings that the kologo’s “spiritual music” is steeped with. Yet, Ayisoba’s lyrical genius does not end with that one song. He continues with a song like “Champion No Easy,” who message is that to be successful in anything one must work hard. “Poka de mi Sala” is a song that discusses about when a man does wrong, how a woman can know that a man has done wrong. “I Want To See You My Father” addresses issues of respect and proper treatment towards one’s elders. All these songs, if sung in Frafra would fit the mold of typical song meanings in kologo music. But because they are sung with a 21st century sound, they are able to reach an entire new and wider audience.

But beyond this, both King Ayisoba and Panji Anoff see Ayisoba and his music as a vehicle for social change. Both are heavily influenced by Bob Marley and Anoff by Fela Kuti. Panji Anoff comments on why those two in particular connect so strongly to today’s youth, which Ayisoba hopes to continue on in their tradition. He says,
They both sought to overthrow the system. They pointed out to us that the system is not helping us, but hurting us. When Zombie came out, I was living on a military base because my dad worked there as a doctor, and it expressed everything I was seeing around me. You see, almost every African country was under military dictatorship then, so when Fela came out with Zombie, challenging the military establishment, it rocked our world. And Bob also, challenging the militarism we had been forced to accept as normal. (Personal Communication, Panji Anoff, 14 November 2008)

Neither Ayisoba nor Anoff would ever say it, but in many ways I think they both see Ayisoba as the Modern Ghanaian Bob Marley. As Ayisoba said to me, “The way that Bob Marley brought reggae music to the world, I want to bring kologo music to the world”. (Personal Communication, King Ayisoba, 19 November 2008). Beyond this comparison, Ayisoba ventures into a pan-African ideology so often sung about by Marley. Comparing lyrics on Ayisoba’s “Africa” from his most recent release to Marley’s “Africa Unite” exposes extreme influence.

“Africa” By King Ayisoba
I told Africa Let’s Be Together,
It will help Africa, Africa will not fall back
Africa will move forward

“Africa Unite” by Bob Marley
Africa, unite
cause were moving right out of Babylon
And were going to our fathers land
How good and how pleasant it would be
Before God and man, yeah
To see the unification of all Africans, yeah
As its been said already let it be done, yeah

Essentially these songs are saying the same thing. Whether this is all intentional or not, I am not sure. I would hope that Ayisoba is sincere in all this and not intentionally creating parallels between himself and Marley, as that would seem to conflict with his overarching ideology of being completely original. Nonetheless, I have also wondered about the lore that surrounds Ayisoba and the truth around it - whether he understands that the more legends he creates about himself the more legendary he will become, or if these things actually happened. My skepticism arose when reading on the Internet other interviews he has given and how they mention of folkloric tales about his life I was not told and do not mention some that I heard (and will describe in another section).
Regardless, what he has done is remarkable, whether it is authentic or not. Ayisoba has taken the foreign and made it African. He has taken the traditional and made it modern. Both these things have a greater potential than just musicality, but that will only be seen with what Ayisoba is able to do in the future. He hopes to take his music to the world, and hopes that the world will listen.

Neo-traditional: The Computer Age
Once King Ayisoba achieved commercial success, winning three Ghana Grammies, the traditional Frafra artists began to take notice of how they might be able to capitalize on his success. Therefore, taking part in the renaissance of kologo music, artists like Sambo, Suley, and others began recording using electronic computer beats to different parts of their music. No longer was the kologo and vocalist the only feature. Suddenly there was a beat and bass line mirroring the kologo. Though it is still possible to detect the original sound of the pure voice and kologo song, this change has essentially fundamentally altered the Frafra recording industry. I would conjecture that as the market gets younger, more people get electricity, and CD players replace Tape Cassettes in the Upper East Region, the beats will be more and more common. However, it is equally possible that it is a passing fad. That remains to be seen, but given the popularity with which so many of the established musicians have begun recording using computer beats, one can assume that as long as the market speaks to that sound, the artists will continue to record with it.
The other emerging trend is singing in English. Suley’s most recent album features numerous English tracks, the title track being “Who Knows Tomorrow”. Additionally, in younger artists like Simon and Steve-O, English songs are becoming more and more widespread. So as newer and younger kologo artists emerge, it is possible that using English and Frafra will only increase.
Another, yet smaller trend is directly influenced from the success of Ayisoba’s “Modern Ghanaians”. Other artists have begun to use kologo in a hiplife fashion, providing the beat for an MC to rap over. During a visit to Cantomanto June 4th in Accra, I encountered a “Bonabato Boys” video shoot which featured my teacher Steve-O. The Frafra duo, based in Accra, is mixing Frafra, hiplife, and now kologo music in their songs. Additionally their album features tracks with Suley and King Ayisoba each playing kologo, while they rap over the beat it provides. This is a unique development and meeting between traditional Frafra music and the modernizing hiplife culture (Personal Observations, Bonabato Boys Video Shoot, 16 November 2008). 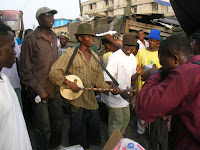