Who are the Frafra? 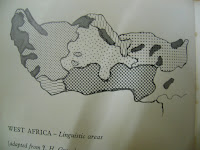 The Frafra are an ethnic group predominantly living in the Sahelian Upper East Region of Ghana with an estimated population of 30,000 (University of Iowa, 3 November 1998, shown in the southern part of the central, lightly dotted area in the photo). The designation Frafra actually comes from Christian missionaries, who when they first encountered Frafra farmers were greeted with the common greeting to people working "Ya Fare fare!" The missionaries began referring to these people as Frafra, a derivation of the greeting, which eventually was adopted by the people themselves. However, the Frafra people the missionaries encountered are actually part of a larger ethnicity known as Gurene or Grunshi, whose ethnic boundaries expand into what is now Southern Burkina Faso. To this day, the Frafra of Ghana share a people hood bond with their Burkinabe brothers and sisters, despite the years of separation beginning with the 1884 Conference of Berlin, which divided African soil up amongst European powers with no regard for existing ethnic geographies.
The major urban center is Bolgatanga, with other urban locales including Zuarungu, Bongo, and Navrongo. Additionally, Frafra have been a part of the rapid urbanization of West Africa, creating smaller communities in Accra and Kumasi, the urban centers of Ghana. For the most part though, Frafra remain mostly farmers to this day. Common crops are millet and sorghum, as well as livestock farming. Nearly every compound I came into contact with had chickens and goats during my time in Bongo district. The political system functions primarily through a council of elders, represented by the oldest members of different lineages, rather than a strong centralized chieftaincy. This council of elders is often the keepers of Frafra history and law. Alongside religious priests, the two exercise power over their subjects, guiding them in moral and pragmatic ways.
Researcher Nancy A. Schaefer recorded a verbal law code and history of Frafra elders in 1974 that is full of proverbial wisdom, ranging on topics from acquisition of a wife, "getting along in a family," (Schaefer, year unknown - post 1997) relationship to white people, herbal remedies, and other proverbial wisdoms. This document was recorded by a council of 8 village elders from “Zuarungu, the precolonial center of the Farefare people of northern Ghana,” (Schaefer, year unknown - post 1997) displaying that it is the elders that are the guardians of time and memory. Related to my research, this document proved invaluable because it displays the proverbial nature of the Frafra and the moral code, both of which are commonly utilized in the lyrics of kologo music. One such example from this document is "A weak person can't carry a donkey's head" (Schaefer, year unknown-post 1997) meaning that one should not do more than he is capable of doing. Another proverb is "the ant says that her vagina isn't big but she will show it to her husband" (Schaefer, year unknown-post 1997) meaning "we don't have much, but the little we have we give." Throughout the entire text, proverbs such as these can be found and they are an important display of the style of narrative the Frafra employ to communicate something, a style utilized excellently by kologo musicians.
Schaefer also provided me with a text that specifically mentioned the kologo and how it is used in Frafra society. Commenting on how they celebrate Christmas, the text reads:
That they dance greet the chief. Plays were plenty. Some beat the banjo (kologo in the plural). And some brewed pito, doing happiness behavior. And played plays one one dancing and singing. (Schaefer, received through personal communication, 1 December 2008)

This text illustrates how the kologo is used during celebrations and festivals.