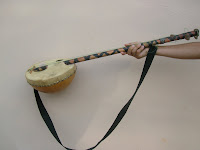 The kologo is a lute instrument with numerous variants across West Africa with different names. The kologo is the Frafra name for the 2-stringed lute. The instrument is made from two main structures. The body is a calabash gourd resonator, in Frafra wanέ (Unless otherwise noted, the information in this paragraph was ascertained from personal communication with Steve-O, 12 November 2008), covered with hairless animal skin, ganέ. A wooden neck, dogɔ, protrudes from the body, poking through the animal skin, extending approximately two feet. At the base of the neck is a wooden bridge, afi-adɔ, where strings begin to run up the neck. The two strings, one bass and one treble, called geelέ, are usually made from nylon fishing line. However, traditional kologo musician Guy One maintains that strings were originally made from cow veins (Personal Communication, Guy One, 25 November 2008). An animal skin tied around the wooden neck holds the strings down which are then wrapped around a tuning peg, talziga, for each string, though this is a modernization of the instrument, as the traditional one had no tuning pegs (Personal Communication, John Collins, 15 November 2008). Out of the top of the neck extends a nail with a minimum of two, but sometimes more, crushed bottle caps or scrap metals, called nashashέ, to create a rattling effect when the instrument is played. Usually, the instrument is attached to some sort of strap, yugi-ergo, which can be made of anything, so that a player can be mobile when playing. Finally, it is played or strummed with a pick, or as the Frafra called it in English a player or in Frafra a weh-erhgah, made from the plastic of a Tampico Orange Drink Bottle, though I would imagine that any thicker plastic would suffice and is used by other musicians. Guy One asserts that the pick was originally made from dried cow skin (Personal Communication, Guy One, 25 November 2008). When you play the kologo, it is your instrument, or mawanέ. Additionally, one must only play original songs and it is taboo to play sngs written by other people.
As I mentioned the kologo has many “sister” instruments across West Africa. The one I have just described is specific to the Frafra people, who reside in Northern Ghana and Southern Burkina Faso. However, numerous other ethnic groups have similar instruments of different names. The most well known of this group is the molo, which comes from Nigeria and the xalam (or khalam), which belongs to the Wolof. Other names include a bappe, diassare, hoddu, komsa, komo, kongtigi, koni, konting, ndere, ngoni, and tidinit. There are also references to the kologo as a kolgo, koliko, and koriko. Regardless of the name or ethnic group, these instruments can be identified as similar enough to the kologo that any work on them can also pertain to the kologo itself. What can be different is the number of strings, ranging between one and five. The body of the instrument can also vary from a round calabash to an oval shaped calabash or even a wooden body. In the case of the komo, Author Paul Oliver sites that the instrument is “played with a pick or plectrum of rhinoceros hide and [is] found deep in the Republic of Niger” (Oliver, 1970, p. 51), illustrating that the material used as the pick varies greatly depending on the location of the peoples playing the instrument.
Interestingly, numerous music historians believe that the American Banjo is a direct descendant of one of these West African lutes. John Collins writes,
…The early slaves from Senegal took this instrument to the Caribbean in the 17th century where it was called the Banjar - later taken to the United States where a fifth string was added and a metal body replaced the gourd and it became the African-American banjo. (Personal Collection of John Collins’ Writings, Personal Communication, John Collins, 15 November 2008)

American President Thomas Jefferson even recorded the instrument in his Notes on Virginia, writing, “the instrument proper to them is the banjar which they brought thither from Africa” (Oliver, 1970). Even more outstanding is the age of the lute, as can be seen in Appendix A, where the instrument is being played in this wall fresco by a woman of the 18th Dynasty in Ancient Egypt, though I never encountered any women players amongst the Frafra. Though I studied just the kologo of the Frafra, it is important to keep in mind that this instrument has many variances with similar but different rich musical histories.
The instrument is tuned with a bass string and a treble string, with no standard tuning for either string. But the relationship between the strings is always the treble string is tuned a fourth higher than the bass string (Personal Communication, John Collins, 15 November 2008). The pitch of the tuning of the strings depends on the individual singer and his voice. Simply, if he wants to sing higher, he will tune the instrument higher and if he wants to sing lower, he tunes it lower. This obviously also depends on the vocal aptitude of the singer. For some of the “sister” instruments, there are more finite rules on tuning and tuning styles, but I encountered no such rigidity with the kologo.